"We want to thank you for helping to reunite us with our beloved Cookie.

The Brimbank Veterinary Clinic contacted us after seeing our Pet Alert to inform us that a good samaritan had dropped Cookie at their place very shortly after he went missing from our house.

We are so thankful to everybody involved.

Here are a few pictures of our reunited family!

Warmest Regards from us all." - Gilbert, Tidi and Tommy

REUNION OF THE DAY: Prince the Shetland Sheepdog in Perth WA "Prince is like another child to me. We have only been together for 10 months, but he quickly claimed me as his 'mum', and our family have nurtured him from when we first got him at 7 months old. He is a very gentle and special dog, however, is wary of people as it appears that he has suffered some trauma prior to being welcomed into our family.

He went missing in unusual circumstances as I was in a suburb that we were not familiar with (an hour's drive from our home), as I was visiting a friend that day. When I realised he had gone missing I felt sick with anxiety.

I went searching in my car within 10 mins of him being gone, and my friend assisted. We saw him running down a busy road towards another very busy main road, and managed to corner him and he then panicked and ran across the road to the other side and vanished.

We spend until dusk that day searching by car around all the surrounding streets, parks and local bushland and went door knocking to try to find him. I also called all local vets and the pound within 2 hours of his disappearance.

Then later that night I went on all social media platforms with a 'lost' ad, and felt encouraged by the words of support and climbing Facebook coverage, and sharing via 'Lost Pet Finders'. I also checked that Prince's microchip details were current, and informed the Registry that he was lost.

I printed fliers and my friends posted information on their Facebook sites, and other lost animal sites. The following day I went to some petrol stations, stock food places and major shopping centres within a 20 km radius, with the fliers. I found it very encouraging with the positive responses I received.

Within a few hours of driving and searching and distributing the fliers, I received a call from a boy who simply said 'I've found your dog'. The relief from those words was indescribable. I asked him to hold Prince and stay with him until I got there, as he was only a 1 minute drive away.

Prince had exhausted himself from running and was laying down on the verge of his driveway next to his car. When I saw him I was overjoyed, and he had a look of recognition and relief on his face that I won't forget. It turns out that this kind boy had looked at the tag on Prince's collar and had called me from these details.

I was so grateful that he had reunited us, and had also given Prince water to drink, and had stayed with him to ensure he didn't run away. It made me realise how kind and caring people can be, and I was so very grateful for this.

I found the most difficult part of the process was to try to manage the grief and anguish I felt for Prince, and my thoughts about what could happen to him if I didn't find him soon enough. And the helpless feeling of just not knowing where he was or what was happening to him, and imagining the panic and anxiety he must be feeling.

So, I tried to channel all of those sad feelings into absolute determination to do everything possible to find him, as I knew that this was what Prince was depending on. And I wanted to focus on finding him safe, and just bring him home.

I thank everyone who was involved with this journey, and for their support and encouragement, and for helping to increase exposure to improve the chances of finding Prince. It is so lovely to feel that sense of compassion from others.

My heart goes out to the pets and owners who are in the same predicament. Never give up hope, and be relentless in your searching efforts. Although it seems impossible, try to redirect your grief into positive energy and strategies to find your pet as soon as possible.

And most importantly, stay safe in your efforts to do this, and have faith that you will be reunited." - Renee 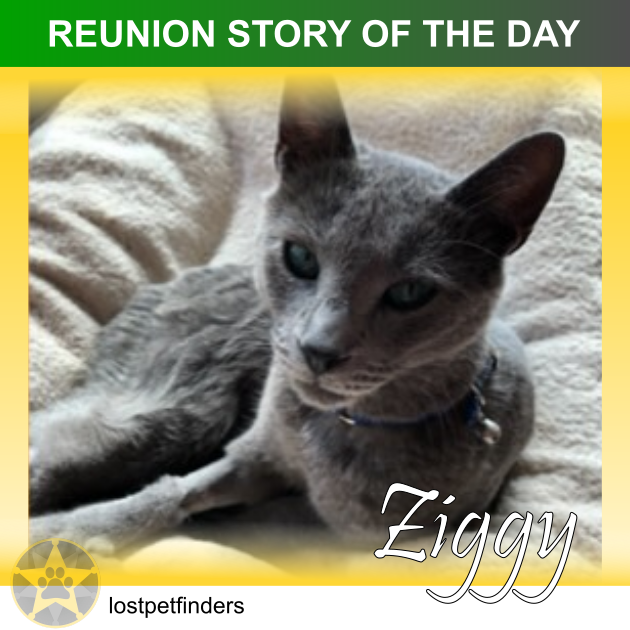 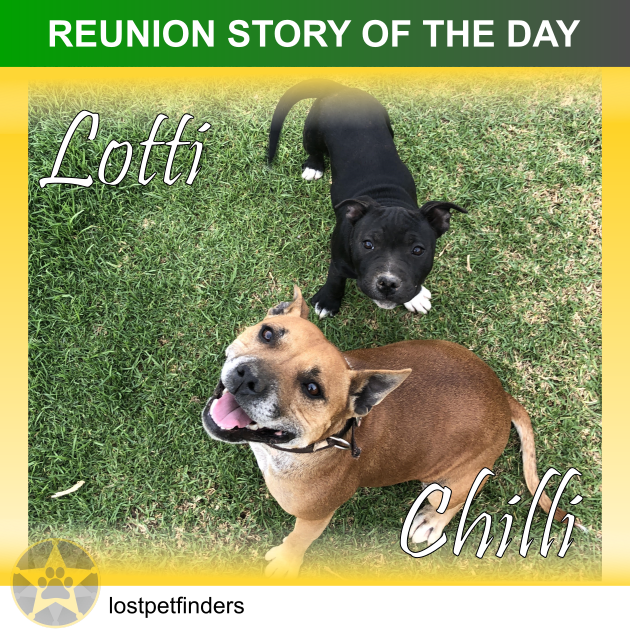 REUNION OF THE DAY: Chilli and Lotti the staffies from Mount Barker SA

"Lotti is a bouncy pup from my girl ‘Chilli’s’ 3rd litter. She is 3 months old and a darling! So is her mum!

When I went to feed them that night I realised they were gone. We were all devastated and spent until 3am driving around the neighbourhood calling for them...sorry neighbours! Didn’t sleep much after that.

Then come first light I went out again with no success. I had to go to the shops for a few things and left my phone home. I arrived home and my son came out with good news. The council had bought them back while I was out.

The lesson from this is to have your contact details on their collar and never take your dogs collar off!

I have excellent tags with my details however this was useless as it was not on her. (My 6year old had taken it off) .Family talk happening with stricter rules! Anyhow here they are home again....." - Rachel