REUNION OF THE DAY: Oliver the ginger and white kitty from Melbourne VIC

"I would like to thank everyone who shared and offered their well wishes for Oliver. We have been so worried about him, being 16 years old and never a wanderer we couldn't imagine what had happened to him.

On Sunday we visited the shelters again and I was starting to feel very despondent that not only would we never see him again, that he may be in a dire situation wondering why 'mum' wasn't helping him.

We couldn't believe it when Oliver walked into the garage last night, he most likely was locked in a shed/ garage by the condition he is in. We did the knocking on doors etc...but was unable to locate him.

Oliver was taken to the vet last night as he has an abscess and has lost a significant amount of weight. He is there on a drip and awaiting test results to make sure he is well enough to come home.

We had just moved to Melbourne from interstate, and ourselves are not familiar with the area. I think the lost pet finder is a very good service as it got the message out to a wide area that he was missing, and when a cat is lost the wider the area that knows the cat lost can really help.

We are so thankful he is home and to the wonderful people who shared his post and offered well wishes and to our neighbours who kept an eye for him.

The vet has just given the all clear for Ollie to come home, so time to build his strength up and give him lots of cuddles and love. Warm regards." - Karin 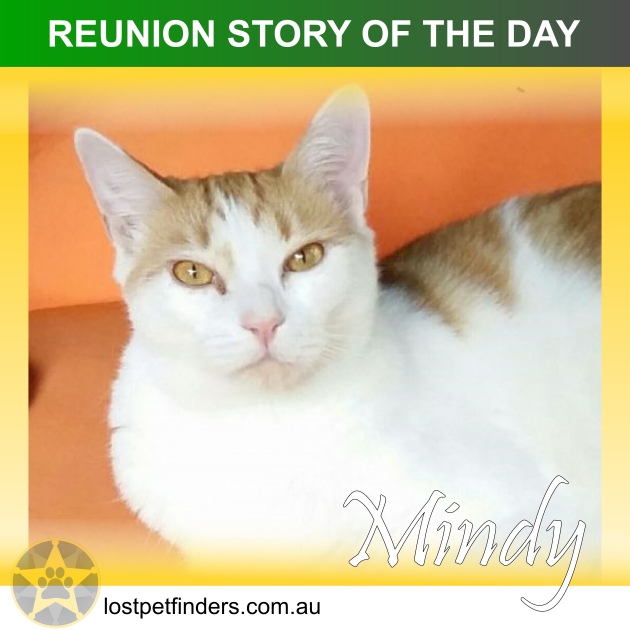 REUNION STORY OF THE DAY: Mindy

"Mindy is one of 3 siblings and along with mother cat they were once owned but when their owners moved out of house they left Mum and 3 babies behind to fend for themselves. After some time a Rescue group found and trapped them and I become their foster carer and later signed over to me after having them all for 9 months.

A lovely couple decided they would adopt Mindy and her brother.

They were on adoption trial when the couple needed to travel to their holiday home as it was flooding and bundled the pair into their large soft crate for the 4 hour journey.

At the half way point the lady decided to offer them a drink of water in their carrier in the car and when a little opening was unzipped Mindy jumped through and ran off into scrub.

I travelled from Sydney to Raymond Terrace the day I found out (day after her jumping out). Before I left I put her on Lost Pet Alert and also paid for the advert to go to the local vets, rangers, pounds etc. I also printed up flyers to put up in the local area.

I was certain I was going to bring her back that day with me…..but was extremely disappointed when I couldn’t see her after 2 hours drive and 6 hours searching I had to leave and make the drive home again through blurry eyes!

The best part is from the Alert going to local vets one of the local Rescue ladies (Kylie from Port Stephens Rescue) called me and met me up on site and she told me that she would continue to stay on the case until Mindy was found! She had such determination, patience of a saint, and would put feed stations out in various areas.

Go looking after midnight. See which food station was eaten etc and concentrate on the area. We had a number of people with sightings but it wasn’t Mindy.

Luckily one day (after 2 weeks being missing) Kylie (from Rescue) was on her rounds and actually sighted Mindy laying in the sunshine in long grass near a timber yard.

Sadly there was flooding and heavy rain from that night for 3 days.

Kylie knew Mindy had shelter and would be safe and kept the feeding up which was taken each night and then knew to concentrate on that area. The food stations were moved closer to an area where she could be trapped.

After 3 weeks and 1 day of being missing she was finally trapped. Kylie took her to the vet straight away who apart from some cuts, dirt and a little gash was in good health.

It was a great team effort as we were constantly on Messenger with updates and keeping Kylie uplifted as she was doing a fabulous job for us. I printed more flyers and letterbox drop flyers that Kylie had distributed.

We emailed the vets, pounds etc even though Lost Pet Alert did this we sent more photos. I had a council person call me and go over the microchip details etc

It was determination and not losing faith that kept us all going. The first light was Kylie sighting her. From then we kept up the hope she would stay in the area.

Mindy was approx 700 metres from where she first went into the scrub and had found a quite, safe place and stayed there.

Had she not had the feed stations she may have wondered further looking for food. We thank god that she didn’t cross the 4 lanes of pacific highway at the scrub where she ran into. We are elated to have Mindy safe and sound back with her brother Mork." - Helen