REUNION STORY OF THE DAY: Rajah

"Raji is a tabby/white DSH from the Cat Protection Society, he is 7 and I have had him since he was 2 months old. I adopted him a couple of weeks after my first cat, Joseph died, as I was suffering terribly from 'empty arms syndrome' and couldn't bear not having that beautiful little soul around the house. 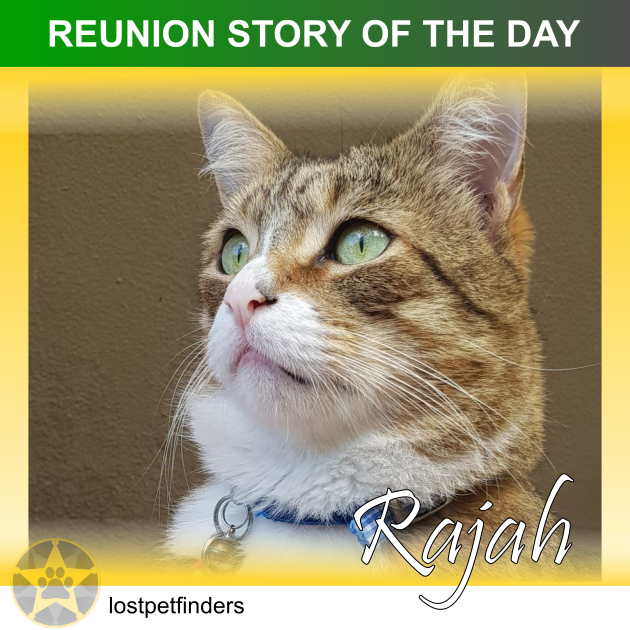 I let him out into the garden for a run in the fresh air as usual on Friday night, thinking that the garden is secure and he has never once escaped all his life. However, this time, somehow, and we still don't know how, he did get out. I closed the back door behind him to avoid him bringing in mice, as he has recently started doing - again, he has never done this before a few weeks ago. Not sure if it is the long hot summer, but we have had a lot more mice lately.

When he disappeared I felt shock, disbelief, fear that he had eaten a mouse that had been poisoned and crawled away somewhere in pain, or to die. Then huge grief - I can't recall the last time I cried so much.

I walked around the neighbourhood many times to look for him. Concentrated on any out-of-the-way hiding places he could be and drains, dark corners, etc. Told the neighbours and asked them to keep an eye out. I added his details to your website and made missing posters and stuck them up around the neighbourhood. It all felt pretty futile as he could have been anywhere but I (and my housemate) were so upset, we had to do something to keep ourselves busy.

Neighbours looked for him, even locals we didn't know did the same. Strangers who saw me sticking up posters empathised and wishes me well.

It helped me to know I was doing all I could and the FB messages I got from a few people were very sweet - some shared my post with other FB sites too. Some people talked about having found their missing pets and that gave me some hope.

I am so grateful that I could ask the broader community for help, knowing many eyes were better than just mine and know that the message about his disappearance was getting out there.

I was so touched by the people on the FB page who shared my post and sent their good wishes. It's wonderful to think that so many people love animals and understood what I was going through. So, thank you again." - Alex